"Reiki" has been utilized as a spiritual healing modal for eons in different cultures under different names. In Japan this sacred transcendent energy is called Reiki. In 1922 when Usui sensei awoke to his realization that he and the Universe are One, he founded his Reiki School as Usui Reiki Ryoho Gakkai.

Mikao Usui was born in 1865 in Gifu Prefecture Japan. He sought counsel from his superior monk in order to find the Satori, the state of enlightenment he was searching for. He was counseled to "Die One time"

March 1922: Sensei went to Mt Kurama in Kyoto to follow his Spiritual Advisors guidance to "die one time". Willing to surrender everything and literally die, he sat in meditation and fasted. At the end of week three he experienced his Spiritual Awakening. He "awoke" to realize his Oneness with the Universe, beyond time and space in the presence of Be-ing (In the here and Now). He had merged with everything.

On his way down the mountain he stubbed his toe and 'automatically reached down to nurture it. In this simple response his toe healed. He realized his merging in Oneness with the universe held an inherent healing capacity and he called his awakening "Usui Reiki". He made his five Gokai, the Reiki Principals to live by and established Usui Reiki Ryoho Gakkai the original Reiki Society.

Along with the five Reiki principles, Usui based his Reiki system on three other practices; Gassho, Reiji-ho, and Chiryo (using intuition and the awareness of energy as treatment)

September 1923: Sensei & his students healed many victims of the Great Earthquake in Kanto district with his Reiki healing system.

March 1926: Usui Sensei was acknowledged for his healing treatments and for training 2000 Reiki Practitioners. He gave Shinpiden Level to 16 Masters, one of whom was Chujiro Hayashi. Hayashi sensei was previously a Captain in the Japanese Navy, serving as an active doctor. On Sensei Usui's direction Hayashi sensei opened and ran a Healing Reiki clinic in Tokyo. After Usui's death, Mr. Hayashi left Usui's Reiki Society the Gakkai, and established his own Reiki Research Center for Healing, to be called "Hayashi Reiki Kenkyu-kai, while still honoring his sensei Mikao Usui. This is the Reiki System that was to come West with Mrs. Takata

It was at Hayashi San's clinic that in 1935 Hawayo Takata, a second generation Japanese woman from Hawaii received healing from a serious illness. She was so impressed with her recovery that she stayed in Japan for a year to practice Reiki as a working student at Hayashi San's clinic. After returning to Hawaii, and on a subsequent visit from Mr. Hayashi she became one of the thirteen students Hayashi-sensei gave the Shinpi-den level to from his new system.

It must be noted that Mrs. Takata felt it necessary to embellish Sensei Usui's background, presumably to appeal to a Western population. Without the World Wide Web to verify the stories this was of course possible at the time. For example it has been spread throughout the West that Sensei Usui was a Christian Minister, this is not true. Sensei was a Shinto/Buddhist all his life. Other incorrect information spread through Western Reiki is that "Chujiro Hayashi and Hawayo Takata were “grand masters” and succeeding Presidents of the Gakkai. 'Also not true. Hayashi was never a President of the Gakkai. Takata was not either. Mrs. Takata's emphasis was on healing, perhaps as a way to reach westerners who at the time would not have been open to receive spiritual guidance from a Buddhist/Shinto perspective.

Unlike Hayashi sensei and Takata sensei, Usui sensei did not search for healing. He was interested in Satori, which I hope explains why I place Passing the Dento Reiki Essence primarily onwards for Western Reiki Masters in my Gendai Reiki Ho Teachings. Never instead of, but in addition with.

"Usui Sensei created Gokai as the base of Reiki and established Usui Reiki Ryoho Gakkai in April 1922. Soon after he began to teach Reiki in Tokyo. According to "Reiki Ryoho Shishin” (policy), it is stated Usui’s Reiki is "to heal the heart and soul first, then the body heals", and states the importance of "creating good human relationship". Healing diseases was not the first purpose for Usui-sensei. He established the Gakkai to live the spiritual way of Anshin Ritsumei. in the "Reiki Ryoho Shishin" Usui-sensei’s translated words tell us "to promote happiness for all people"

Happiness is in the realm of accepting what is as it is without liking it or disliking it.

It is important to credit Sensei Usui and Usui Reiki with the correct history of Reiki, and to clear up previously incorrect "histories" spread throughout the Western Reiki Communities. As previously said, perhaps in the day when Mrs. Takata was teaching, Westerners and Japanese were too far apart in spirituality and politics at the time. No blame. She was healed by Hayashi Reiki and she did what she knew to be the Reiki Way and she succeeded, spreading Reiki throughout the Western world reaching many cultures who subsequently embraced Reiki. Today Reiki Healing is in most Hospitals throughout the World. Now we must include the missing component, the spiritual piece, to raise each person’s inner Reiki resonance to vibrate in Health and Happiness and match the vibration of Reiki in the Great Universal Frequency.

Mrs. Takata's Reiki was so prevalent in the Western world that it ironically returned to Japan via Western Reiki. And soon after the Usui Reiki Ryoho Gakkai was re-discovered, alive and well with Head Quarters in Tokyo.

Reiki Masters? Drop us a Line if you’d like to join us in Usui Reiki Pilgrimage Trips to Japan and receive Gendai Reiki’s Essence from Doi sensei next time we go. 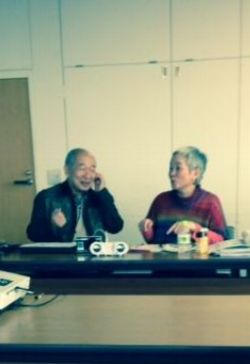